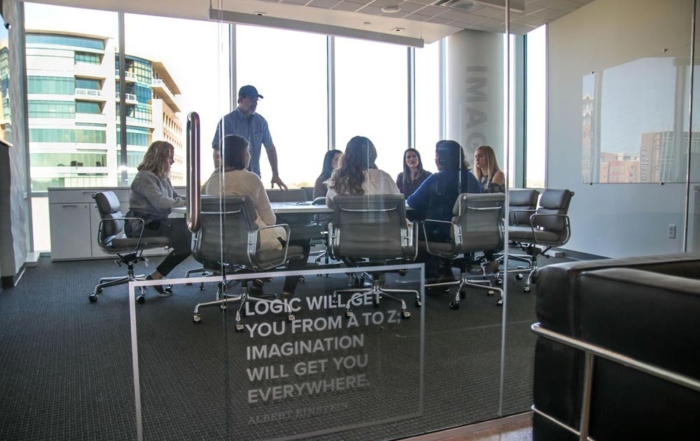 In the light: PAVLOV settles into new home

The PAVLOV Agency was ready to come out into the light. Not that the creative agency, formerly known as Concussion, ever shied from a shot in the spotlight or that its creative minds aren’t ablaze with new ideas.

But in the company’s old digs on Vickery Boulevard, somewhat out of the way in a ground-floor industrial warehouse-type space, sunshine could be at a premium.

Or maybe, after 16 years, as CEO AIlen Wallach said, “It was time. Our old space was great, but it was 16 years old and we craved a change of scenery.”

Change of scenery is right. Settling in on the fourth floor of a new five-story building at the southeast corner of West Seventh Street and University Drive, the advertising agency’s new space is bursting with sunlight and open spaces.

“This time around we wanted new construction with plenty of glass and natural light, plus a killer view,” said Wallach. “Since the build-out was first generation, we had the chance to custom-design a space to fit our needs.”

The building was built by Eyeworks and is anchored by Regions Bank.

Leland Prowse of Transwestern helped PAVLOV find the space while the landlord reps were Matt Montague and Frank Taylor of JLL. The new office has 5,196 square feet compared with about 3,800 in the old building.

Wallach noted that the firm had received compliments on its old space, “but maybe more importantly, successful brands reinvent themselves from time to time to stay relevant to an evolving marketplace. What better way to make a statement than with a bold move to awesome new space?”

As far as location, Wallach says the new one has “one foot in the Cultural District and one in the vibrant, West Seventh entertainment district.”

Employees have already taken an office field trip to The Modern Art Museum to take in the Kaws exhibit and grabbed street tacos from a food truck in the area.

As for design, Wallach said his vision was for a hyper-clean design aesthetic to accentuate the “magnificent views throughout the space.”

Researching best practices for modern workspaces, he hit on the idea of an open “hive” approach leading to better communication and collaboration.

“The all-white interior is intended to be a clean canvas from which our creative ideas flow, and to hint at the ‘stimulus lab’ position we embrace,” he said. Thus the 2014 name change from Concussion to PAVLOV, referencing the stimulus-response experiments of Russian physiologist Ivan Pavlov with dogs that provided a foundation for behavioral science. A blown-up photograph of a dog greets visitors from behind the front desk to further cement the connection.

Transwestern helped with construction management and coordination of the new space. Amanda Clark of CMA-Fort Worth helped with space planning and interior design and Dennett Construction built the interior office space.

While many corporations would have saved the best views in the office for top management, PAVLOV took a different approach.

Anyone coming in for a meeting with PAVLOV is also treated to the great view of the big five-way intersection and the surrounding area. And both large and small conference rooms provide wide open views of West Fort Worth.

Also in the main room is a structure that looks like a space-age phone booth. And that’s just what it is. It’s a soundproof phone booth from a Finnish company called Framery, giving workers a place for private conversations or small conferences.

“Our space age phone booth looks like something out of The Jetsons,” said Wallach. “It’s one of the first to be installed in Texas. Their clients include some of the world’s leading brands, including Uber, Microsoft, SAP, Deloitte and PWC –– and PAVLOV,” he said proudly.

But Wallach sees no real changes to PAVLOV. “[W]e are sharpening our focus as a ‘tradigital’ agency – one that is equally proficient in traditional advertising and marketing services as the new and emerging digital offerings”

Fort Worth advertising agencies are reaping the benefits of the city’s growth, Wallach said. “Overall, I think we are all recruiting better and better talent. The creative class is discovering Fort Worth and bringing unique skills to the table.”