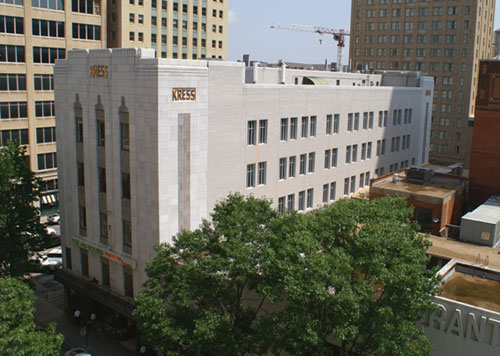 A New Lease on Life

By Sandra Baker
Fort Worth Star-Telegram

FORT WORTH – Margaret Bunten recalls the times as a small child when her mother, Evelyn O’Hara, would bring her to the second floor window of the art-deco Kress Building to watch parades along Houston Street.

Continental National Bank didn’t mind them using its office to take in the view. O’Hara owned the building.

“I remember all the large computers that were here,” said Bunten, whose mother bought the building in 1973.

Bunten said that a few years ago, her brother began looking into reusing the space and put together a business plan. The siblings agreed that it was time to put the entire building back into use, she said.

“We all want it to be productive and to stop the decay,” Bunten said. “Rather than turn the space back into offices, he urged us to consider the residential use.”

The 48,000-square-foot building was constructed in 1936 by the New York dry goods chain S.H. Kress Co., which used the upper floors for offices and storage. It was one of a few private buildings constructed during the Depression, according to historical records.

Kress left the building in 1960. Continental National Bank used the three top floors for offices for about a decade until the early 1980s.

The street level, with a suspended 24-foot ceiling, has had a series of tenants. The Fox and Hound English Pub & Grille has operated there since 2001. Hyena’s Comedy Club, which became a tenant in 1993, and its adjacent dance club occupy the basement.

The Kress Building is among several downtown office structures being renovated for residential use, including the Neil P. Anderson Building on West Seventh Street.

Several years ago, a downtown-market study showed great demand for residential units for lease and ownership. The market has responded with a slew of apartment and condominium projects. But there is still room for the Kress Building Lofts, Bunten said.

“Downtown is in high demand,” Bunten said. “I’ve already had a lot of interest.”

Andy Taft, president of Downtown Fort Worth, Inc., said he applauds the Kress owners for taking on the challenge of renovating the nearly 70-year-old building, which he called a great addition in the core of downtown.

“Every little bit helps,” Taft said. “There’s an important role that smaller buildings play in the downtown residential mix. High rises aren’t for everyone. It is a wonderful adaptive reuse of an historic building.”

Eight apartments are planned for each floor, and the building should be completed for occupancy by April, Bunten said.

The building is between Houston and Main streets and has a southern façade of solid brick. Large windows for each unit will be cut into the 18-inch-thick wall.

The owners are trying to get the building on the National Register of Historic Places, which would make it eligible for federal tax credits. As a result, the windows are subject to approval by the National Park Service to ensure the building’s historical and architectural integrity, said the project’s architect, Raymond O’Connor.

The review is under way, but Bunten said she expects the windows to be installed within the next couple of months. The apartments will be about 800 to 1,100 square feet. Rents will begin at about 1,600 a month.

Each unit will have washer and dryer connections, and residents will have a private entrance on the Main Street side of the building.

The building’s roof will also eventually have amenities such as a park like area and possibly a spa, she said.

Bunten said she plans to begin pre-leasing the units in January.

Scott Dennett Construction in Fort Worth began the renovations in April, although, Phillip O’Hara had been working on and off the past couple of years to gut the three floors, Bunten said.

Scott Dennett, owner of Scott Dennett Construction, who has a great deal of experience working on historic buildings, said the work is challenging but rewarding.

Because original architectural plans have not been found, workers often uncover surprises, including two chimneys. One led to a boiler room in a subbasement, Dennett said.

Another discovery, in May, was about 3,000 Mexican free tailed bats living in the building. About 1,200 were moved to a bat sanctuary in Mineral Wells.

“All the historical projects are fun to work on,” Dennett said. “We really take pride in the work we do. These are projects that will be seen by a lot of people.

Bunten is the project’s general manager, having quite her job as a paramedic in April.